“Are We There Yet” – Grain Elevators and Learning 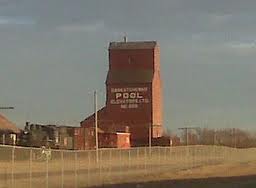 They say all stories have teaching moments. The following is a story from my childhood. Although as you’ll see it made some immediate difference in my life, it took me another 40 years to understand and appreciate the learning.

As a boy growing up in Calgary, Alberta, every summer my parents would take my two younger brothers and me on a road trip to visit our grand-parents, who lived in small, towns in southern Saskatchewan. Although my brothers and I completely enjoyed ourselves once we’d reached our destination, the eight-hour car drive that it took to get there seemed endless to us. The terrain was flat and covered with monochromatic fields of grain. The first part of the trip was on a paved two-lane road, which later gave way to a dusty, one and one-half lane, gravel road, paralleled by an infinite line of telephone poles and railroad tracks. Tracks which inexplicably never seemed to have any train traffic. Every once in a while the road would be punctuated by a rural intersection around which a couple of buildings, a gas station and most prominently, a grain elevator were huddled together for apparent companionship.

My Mom and Dad were in the front seat along with one of us boys. For my brothers and I, the front seat position was of course prized because there was more to see and a reduced likelihood of being carsick. At each rest stop, we’d rotate the front seat opportunity. The two left in the back, either sat on the seat looking out the window in a vain attempt to see anything interesting, or lay on the floorboard somehow conforming their body to accommodate the drive shaft hump.

During the trip, one after the other of us boys would call out, “Are we there yet?” followed seemingly, only moments later with a repeat of the same question, but with more whining. This pattern continued, progressively eroding my Dads patience until he reached his annoyance threshold, at which point he would curtly say “don’t ask me again, I’ll tell you when we get there.” That of course would extend the interval between the whiny question cycles, but it didn’t stop us completely.

During one trip however, having once again reached his limit, my Dad said, “Why don’t you count grain elevators?” He’d already tried having us count telephone poles, but that was too boring. Now, I don’t know about my brothers, but looking back on it, this grain elevator counting thing turned into something of an epiphany and an important learning experience for me.

I’ll insert here, a brief sidebar for those of you unfamiliar with grain elevators. They’re large, multi-story structures located adjacent to main rural roads and train stops. They’re typically painted rusty-brown, red or white and they’re emblazoned with the name of the grain company, or co-op, and the name of the small town or village which was clustered around them. They serve as collection points for the harvested grain from all of the surrounding farms, and as loading points for large trucks or trains that would take the grain to the big city processing centers. On the flat prairie they’re really the only vertical landmarks and they’re as iconic to the towns they anchor as the buildings that produce the skylines of New York and Chicago.

So, with my Dads prompt, I started, somewhat unenthusiastically, paying attention to these grain elevators with their tall, angular shapes, limited color palette and obscure names. After a while though, this grain elevator focus started to grow on me and I realized time was passing more easily. After doing this for a couple of summer trips, I started to recognize and remember, the individual grain elevators, the towns they represented and the sequence in which they appeared during the trip. This gathering of grain elevator visual cues not only gave me a sense of trip progress but strangely enough gave me a feeling of a kind of empowerment over the situation. I was no longer semi-conscious, anxious cargo, I felt like I was part of a transportation project. My brain neurons had constructed a mental map of the trip and I could now realistically envision the coming end-point and had gained some feeling of control over my environment. I never asked the “are we there yet,” question again.

So what’s the teaching moment? It may not seem like much I suppose, but for me it’s like de-coding the whole learning process mystery. It’s about understanding how our brains develop from childhood to adulthood and how we can be further develop them to become to become adults 1.0 and 2.0 so to speak. Our lives are constantly bringing us subtle learning opportunities like these, and we need to pay attention to, and leverage them. We must learn to take the raw data from our senses and apply context that will turn it into information. Information, that with meaningful application can become knowledge. Knowledge re-wires and matures our brains, giving us mental maps of the way the world works. These maps enable us to predict future outcomes, based on our past experience and real-time sensory input. This capability reduces uncertainty and our anxiety over it, and gives us confidence, hope and clarity to make good decisions and allow us to feel like we have some control our lives.

Confident and competent in “knowing what we know”, we can apply and extrapolate it in new contexts, which over time will bring us understanding. And if we’re really lucky, and sufficiently invested in thinking about thinking, we might even develop our understanding into wisdom. And when you become wise, you can tell your kids to count grain elevators when they ask you… “are we there yet.”

I retired at the end of 2011, after a 39 year career in the Aerospace industry as a Propulsion Engineer, Engineering Manager and Program Manager. My professional interests and expertise are in the areas of Program, Risk and Knowledge Management. I'm passionate about life-long learning in a wide variety of topics and I'm committed to sharing my knowledge and ideas with those who are interested. I'm an Aerospace Industry Consultant. I serve my community as a Rotarian. My hobby is playing as a jazz keyboard.
View all posts by donmcalister →
This entry was posted in Humor, Personal Development, That's Life and tagged brain development, cognitve development, humor, learning. Bookmark the permalink.

7 Responses to “Are We There Yet” – Grain Elevators and Learning